“I have worked with Bill over the past year on the most difficult and stressful period in my family’s life. After 34 years of success as a franchised Chrysler dealer, my family’s business was forced into bankruptcy.

Bill Maloney was called in to offer his insight into our situation. Bill immediately cut to the chase and forced us to look at the reality of the situation. His honesty, professionalism and experience guided us through many tough decisions. I have never worked with a more competent and straightforward individual.”

“This letter is to advise you concerning the outstanding performance that Mr. Maloney has produced over the past 2 years as President and CEO.

The former CEO and President, the developer of this project, had brought the company to within, not weeks or days, but hours of foreclosure. Bill set out, in planned, methodical phases to find out as much as possible about the operation, the people involved, the financial and mechanical condition of the project and company. To our surprise he even developed a friendly and casual relationship with the developer and some of his top operatives. It is an understatement to say that his management of all phases of the project to completion and within budget is an achievement beyond belief in the current economic environment.

The hard work and expertise of Bill Maloney, as a good listener, and with good counsel, led the company out of bankruptcy. Need I say more? Bill is a rather unassuming, down to earth type guy, with the ability to disarm a potential adversary through patience and non-committal, but that brain is rolling at top speed. He is truly an outstanding asset to your organization.”

“For the past three years I have had the good fortune to work with Bill Maloney. Our operating company was forced to file Chapter 11 Bankruptcy. Though we had an excellent attorney to represent us, we had no experience in these matters and floundered around for a few months. In January 2004, we met Bill and hired him to help us.

With Bills’ forceful personality and guidance, there was immediate improvement in every aspect of our business. Bill opened a dialogue with our secured creditors and instituted improvements in our operations. He was a teacher and mentor to the younger members of our company and a morale booster for the more seasoned.

Our comparative sales turned positive soon after Bill’s arrival and have remained positive ever since. Our company exited bankruptcy and our chances for continued success appear sound.

A great deal of the credit for our successful recovery belongs to Bill Maloney, to whom I endearingly refer to as “bulldog“.

Bill Maloney came to the company in the role of Chief Financial Officer. His assignment was to have been temporary. I later asked Bill if he could and would take the day-to-day helm and he agreed to do so. He is extremely competent, confident and independent. His traits are quickly recognized by the other involved professionals (lawyers, bankers, consultants, etc.). This gave instant credibility to the decisions we jointly made and made a virtually impossible task attainable.

Due almost exclusively to Bill’s efforts, the company will make a distribution in excess of $3,000,000 to its shareholders after having paid obscenely high legal and other administrative costs.

He was very effective at reigning in the pigs bellying up to the trough. He was exceptionally adept in reviewing records and documents and interfacing with legal counsel to advance the company’s position in its disputes with creditors. His reviewing multitudinous documents and ferreting out the relevant evidence in a multi million-dollar dispute we had with a major supplier was invaluable.

If one has a project needing a sensitive diplomat who suffers fools well, Bill is probably not a good fit. If one has a project that requires someone with great capabilities, is thick skinned, diligent and energetic, send Bill to him if he can tolerate hearing the truth.”

“It would not be an exaggeration to say that Bill may have “saved the company”. When Bill joined us in October of last year, he quickly took control of the financial activities of the company and stabilized our financial condition. His experience and wisdom proved to be an asset to our senior management team. He helped the management team focus on strategic issues, provided a reassuring sense of control to the entire organization, and changed the focus of the staff organization to a customer service focus with emphasis on execution.

The list of his accomplishments and deliverables is impressive. We are grateful for his timely assistance and he will be missed by our entire organization.”

“Bill is an exceptionally talented individual. His contribution to our very complex case was not only a validation of the unique business concept that is the premise behind your firm, but also an invaluable insight to the business aspects of the restructuring. Bill quickly became immersed with our business and was able to provide operational and marketing support on top of his financial expertise. But, perhaps most impressive was Bill’s dedication to and appreciation for, details. He read and analyzed every legal paper, participated in strategy meetings with our professional advisers, and was instrumental in carrying through, and assuring the implementation of, our restructuring plan.

Finally, I would be remiss if I neglected to emphasize that at all times Bill was able to keep his professional and personal integrity (as well as a good dose of healthy humor).”

“I learned the most important lesson of my life from Bill Maloney, courage”

“Bill assisted us in the complexities in Chapter 11. We were pleased with his expertise and frankness. He was very educational in his guidance of the idiosyncrasies of bankruptcy, we would not have been successful exiting without his assistance”

“Bill was a great sounding board for me due to his deep knowledge from a lifetime of challenging experiences. He also developed a strategic plan that was well thought out, actionable, and had accountability”

“I hired Bill to help me deal with problems I was having with my bank. He was a godsend and guided me through some very difficult times. His wisdom and experience was invaluable to me. He helped toughen my spine when I needed it.

Bill also worked with me to focus on my company’s strategy and opened up a whole new way of looking at my business. We developed a storybook sparking new life and excitement into my business. I have used Bill as my sounding board for many years and cannot imagine what I would have done without him and only wish I would have met him 20 years ago.” 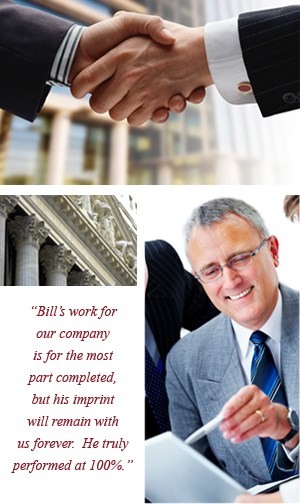